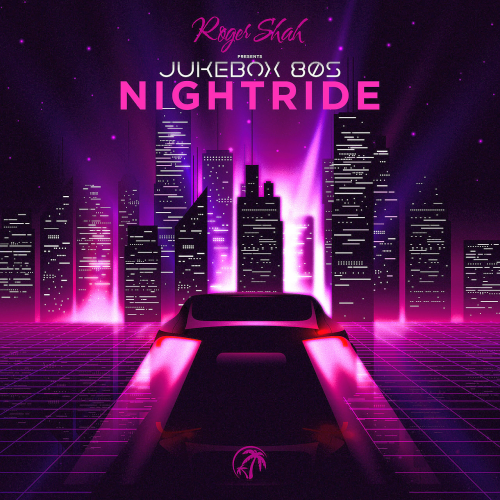 The last ten months have seen many artists pivot, experiment, branch out and generally direct their attentions to other musical areas. To group the latest longplayer from Roger Shah in that though would be to overlook a musician who already album-moves out of ‘his lane’ one year in every two. Whether it’s through neo-classical soundtracks for yet-to-be-made films (ala last year’s Guardian Of Dreams) or yoga & wellbeing albums, Roger’s as regular an irregular as they come.
Ahead of starting his latest departure, Roger was as clear as to what he didn’t want, as what he did. For its focal decade ‘Nightride’ trades in touchstones, inspirations & affections, whilst hurdling the pitfalls of pastiche & excess. Eschewing out-and-out synth-synthetics, across it fourteen tracks, resonance, chime and echo become its foundation blocks.
As reflective as any mirrored-windowed skyscraper, the robo-soul of ‘Purple Skies In Your Eyes’ brings the vocoder back, while its analogue synths allude to The Human League. ‘Ripped Knees’ heightens ‘Nightride’s atmosphere again, but lowers the pace, using its more measured tempo to stretch the synth lines and amplify the emotion. In an album flush with bass, ‘Don’t You Say You Love’ pares the lower frequencies back to concentrate on chime, while its Jody Watley-like vocal aims straight for the soul. Through ‘A Spaceship Landing On A Magic Island’, Roger effortlessly links Jukebox 80s’ theme and his more renowned Balearic sound. Part Arthur Baker, Herbie Hancock & Daft Punk, the electro rock of ‘I Don’t Give A Damn’s ties the album off with seven funk fuelled minutes of needle scratching, synth riffing and bass dropping.
Информация
Посетители, находящиеся в группе Гости, не могут оставлять комментарии к данной публикации.